The legend of the High Jewellery Serpenti watches comes to life again in the form of three magnificent serpent timepieces. Coiling with Bulgari creativity, the enchanting timepieces were unveiled on the occasion of the Biennale des Antiquaires in Paris, the most important event on the jewellery calendar. 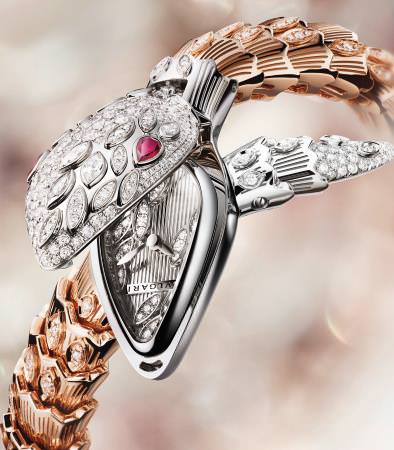 The Serpenti Collection has consistently entwined exquisite design, as much High Jewellery bracelet as dazzling timepiece. Curling in white or pink gold, the “scales” of the snake are set with sparkling marquise or brilliant-cut diamonds and enamel. From its precious head spy seductive pear-shaped emeralds, rubies or malachites, the snake eyes that have established Serpenti as the eternal icon of the House. 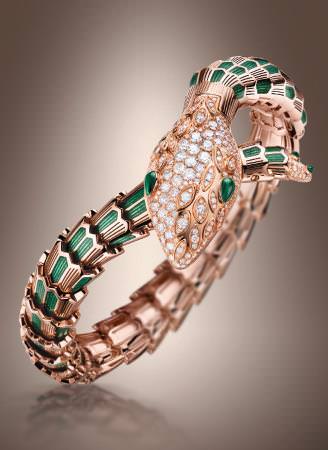 An icon of Bulgari design since the 1940s, the mythical serpent has symbolized eternity, femininity and prosperity since ancient Egypt. The snake has been a powerful symbol, guaranteeing protection and power to those who wear it. There are more than 2700 years of Roman history enclosed in this mythical creature, the inseparable accessory of Aphrodite, goddess of love, and of the Roman fashion victims of the 1st century AD. Pliny describes these as wearing two or three earrings, named crotalia, a word which means rattle snake in Latin.It has naturally become a second nature with Bulgari.

No leader of the ancient world is more closely associated with the snake than Cleopatra. Strongly intertwined to the Roman Empire through her love affairs with Julius Caesar and Marc Antony, when she first arrived in Rome in 46 BC, the cheering crowd could admire her beauty enhanced through the coiled gold snake bracelets that were adorning her body.

Almost 2000 years later, in the 1960es, Elizabeth Taylor could not resist to ask her favourite jeweller in Rome at via Condotti 10, to create especially for her a Serpenti bracelet, that she was wearing on the set of Cleopatra, as the new queen of the Nile. 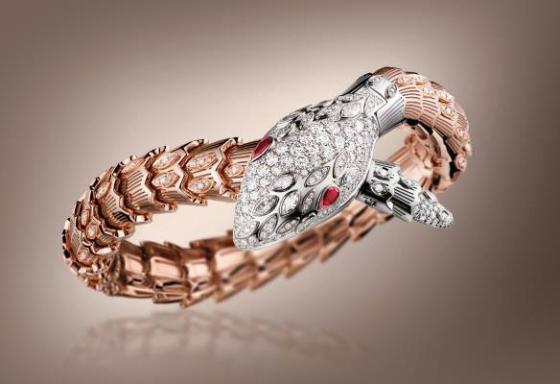 The Dolce Vita and the 60es, which breathe the wave of modern, playful and youthful hedonism which sweeps over the world – from music to fashion, from beauty to jewels – take over the passion for the immortal talisman with captivating magnetism, playing with the snake as stylistic signature, instantly recognizable.

After the first fashion wave, Bulgari focusses its jeweller’s palette and most advanced techniques on it, infusing the Serpenti jewels with the signature qualities of the brand : remarkable technical exploits, surprising combinations of materials, a passion for colour, and wearability. It is an icon which appears on all Bulgari creations: watches, bags, scarves, sunglasses and leather bracelets. 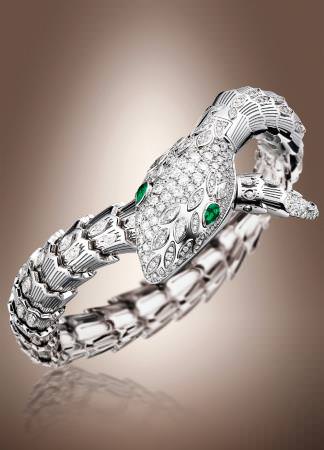 In the early 21st century the snake represents a return to magic and mythical symbolism. Beyond its extraordinary decorative qualities, with its undulating long cylindrical body and its feminine sinuosity, the snake perfectly expresses the spirit of the times, abolishing the temporal barriers that Bulgari has always enjoyed transcending. More than ever before, it now symbolises the ability to reinvent oneself and stand out for a unique style, the prime qualities of times in which the search for the self has become a cult.

The seduction of the snake lives on in the Serpenti timepieces, embodying each Bulgari hallmark: the love of colour, a juxtaposition of materials, supple wearability, and avant-garde techniques.

With the Cinemagia High Jewelry Collection, Bulgari celebrates its passionate relationship with the silver screen: an array of wondrous pieces spotlighting (...)

Bvlgari celebrates life and beauty with Barocko, the Roman jeweler’s latest take on a bold and brave approach to high jewelry (...)
Bvlgari

High-end Indian jewellery exporters, who specialise in gemstone-studded jewellery, have always been quick to research and assess markets across the (...)