Internet: Searching for Fine Jewellery on the Internet


Internet: Searching for Fine Jewellery on the Internet

Finding information on just about anything has never been easier since the advent of the Internet. At its entry point are a number of search engines such as the very popular Google, which is utilized by more than one billion Internet users around the world, often on a daily basis. Every sector of the economy is affected by the World Wide Web, and this includes, of course, the jewellery industry.

Integrating the Internet into a company’s commercial policy has strategic advantages for all brands, and the jewellery sector is no exception, as Jean-Christophe Bédos, CEO of Boucheron, indicated in Business Montres & Joaillerie (July 2009): “Retail and the web are the best channels for attracting new clients.”

Social networking websites such as Facebook—now the world’s fourth largest site with 250 million users around the globe—are also places where important interactions occur among individuals. Sixty percent of wealthy consumers in the United States are members of at least one social networking or community website such as Facebook or LinkedIn. One-third read blogs.

A recent survey by Jewelers of America (JA) indicated that “jewellers went through a period of growth in Internet usage for their jewellery business, but the data shows that the Internet’s full potential is still not being capitalized on by many retail jewellers.” According to the same study, “28 percent of the respondents claimed that they use the Internet for promotion and sales, and 48 percent stated that they use it only for promotional purposes.” This means that 76 percent of the respondents use the Internet for their jewellery business in some way.

As these numbers demonstrate, the Internet has become a supplementary sales channel, both direct and indirect. Today, before going into a store or making a jewellery purchase, a growing number of consumers are spending several hours on the Internet in search of information about a product as well as to compare prices. Importantly, they also seek out the opinions of other users in order to help make their final choice. This observation is even more understandable in periods of economic downturn where every dollar counts.

Fortunately, the Internet is known for its measurability. Thus, the number of searches and sites visited by users can be tracked and analyzed in order to better understand the online behaviour of today’s consumers. Each keyword in a search engine leaves a trace, and it is possible to “listen” to conversations between Internet users regarding any particular brand. This offers a unique opportunity for a brand’s management to adapt its strategy as a result of these findings, and thus to attract both a clientele ready to purchase a river of diamonds and a younger target audience looking for an engagement ring.

This measurability is summed up by Philippe Maillard, publisher of Europa Star, “On the vast oceanic surface of the Internet, surfers crisscross in all directions but their paths can be traced from wave to wave. It is a little like a GPS satellite making a complete map of their travels.”

A look at fine jewellery online

Using technological tools developed for the WorldWatchReport, IC-Agency, the leader in luxury digital marketing, has decoded online searches for some of the world’s most prestigious global jewellery brands. This report is available exclusively to the readers of International Jewellery. 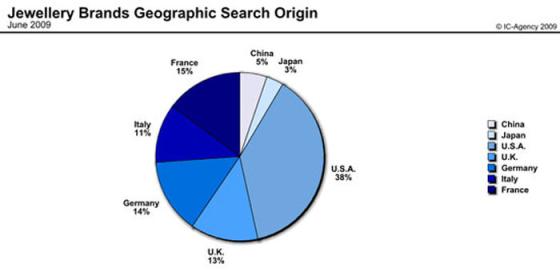 The four European countries combined accounted for 53 percent of searches, ahead of the United States. France had the most, with 15 percent of total searches, indicating that French consumers were most inclined to use the Internet to learn more about their favourite jewellery brands—Boucheron, Van Cleef & Arpels, Chopard, and Cartier, all emblematic of French chic and savoir-faire. Chopard and its Palmes of the Cannes Festival, Cartier and its Foundation for Contemporary Art, and Van Cleef with its new “A Day in Paris” collection only serve to strengthen their francophone roots with consumers around the world.

Elsewhere in Europe, German consumers seem to have a strong affinity for Bulgari and Tiffany, which received 19 percent and 28 percent, respectively, of total searches in that country. For Italian web users, Bulgari and Piaget are clearly the preferred brands. On the contrary, however, the relatively consistent share of searches coming from the United Kingdom—between 8 percent and 15 percent for all the brands—did not allow for specific trends to be determined for English consumers.

These observations are even more interesting if we look at searches for watches. According to the WorldWatchReport, searches for Bulgari watches in Germany were less than those in the UK. It would thus seem that German consumers have a clear preference for the Italian brand’s jewellery products over its timepieces. 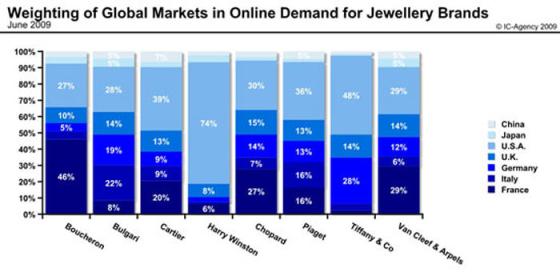 With five percent of total searches coming from China compared to three percent from Japan, the enormous potential growth of the Chinese market is obvious. Even though access to the Internet is relatively less developed, Chinese web users still number about 300 million—approximately equal to the total population of the United States.

Due to the vast expanse of China, and the multicultural diversity in the fast-growing affluent regions, it is difficult to draw up a standard profile of the typical Chinese consumer with regard to demand for luxury goods in general and jewellery in particular. Wealthy Chinese consumers are much younger than their foreign counterparts: 80 percent are under 45, compared to 30 percent in the United States and 19 percent in Japan. They are more interested in functionality and quality, yet they are also more apt to search for brand names rather than models and collections, mainly because of translation issues. Overall, they spend a large amount of time surfing the Internet. 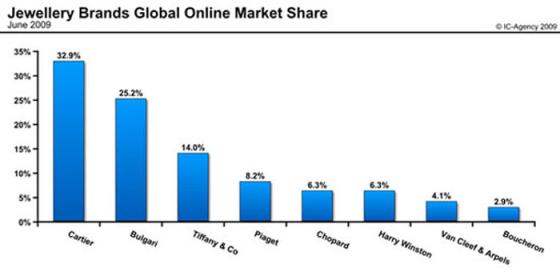 The American market in search of new life

The most important single nation for online jewellery searches is the United States, with 37 percent of the total reflecting all brands combined. [As an aside, the search numbers for fine jewellery in this market differ markedly from those for luxury watches. According to the WorldWatchReport 2009, the USA accounts for 43 percent of the world’s watch searches.]

In terms of jewellery, brands such as Harry Winston and Tiffany account for 74 percent and 48 percent, respectively, of searches originating in their country of origin. Encouraging domestic demand is obviously strategically important. In this context, what are some of the ways to stimulate growth in a nation where signs of the recession are still present?

With a highly connected population, the American market seems to have all the prerequisites for successfully embracing innovations in digital marketing by luxury brands: ultra-targeting of online ad campaigns; surveillance of users’ opinions of brands; intelligent presence on new media such as Facebook; advanced multi-channel branding using brand ambassadors; and development of digital conversations on all official communications supports. There are as many avenues to explore online as there are opportunities to create new ways to communicate with current and future clients. The most agile and daring brands in the digital domain will have the competitive edge, which will strengthen their market share in the years to come.

Created in 2000, IC-Agency is a leader in luxury digital marketing. Based in Europe (Switzerland) and in North America (Canada), IC-Agency provides its clients with services such as analysis, promotion and protection for their brands, products and services. Among IC-Agency’s clients are many independent luxury brands, as well as brands belonging to groups such as Swatch, Richemont, LVMH, and PPR/Gucci. In partnership with Europa Star, IC-Agency releases each year at Baselworld the WorldWatchReport, a reference market study that deciphers queries entered into search engines throughout the Internet from millions of prospects for 25 luxury watch brands in seven key export markets.

The increasing affinity that shoe lovers exhibit for iconic luxury footwear brands is highlighted in the latest analysis of the Luxury Shoe Industry by (...) 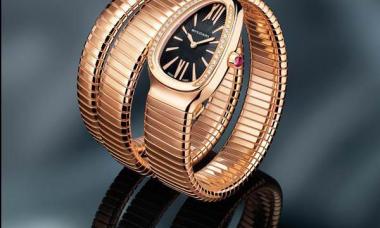 The Chinese market has passed from the status of becoming a promising market to now being one of the common and indispensable components in the development (...)
FOR MORE

Emeralds: From Cleopatra to Beyoncé | Christie’s

Emeralds have captivated everyone from Cleopatra to Beyoncé. Learn more about this glamorous green gemstone from Rahul Kadakia, Head of Jewellery for (...)

Antiquities specialist Hannah Solomon looks at a selection of stunning pieces that draw a direct line between ancient cultures and the ways in which (...)

With the Cinemagia High Jewelry Collection, Bulgari celebrates its passionate relationship with the silver screen: an array of wondrous pieces spotlighting (...)