With every Great Characters Edition, Montblanc puts fine craftsmanship at the service of culture to tell the story of cultural icons who made their mark on the history of humankind. 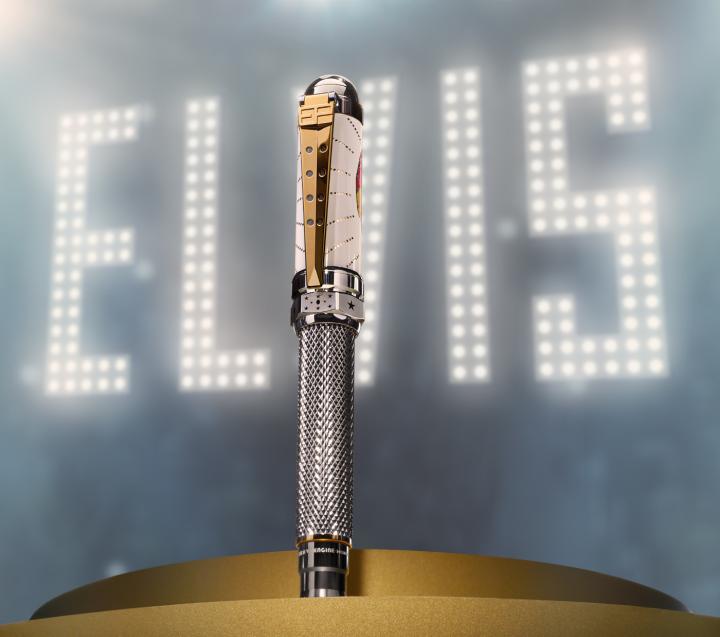 One of those characters was a young musician from Tupelo, Mississippi who went on to be referred to as the King of Rock ’n’ Roll. Elvis Aaron Presley (January 8, 1935 – August 16, 1977), known simply as “the King”, is still celebrated today for electrifying the world with over 100 chart hits, over 1,300 concerts and 31 feature films. The meteoric rise of the ‘King of Rock ‘n’ Roll’ was famous in the music industry with songs like “Jailhouse Rock” and “It’s Now or Never” that propelled him to the top of the charts. With over one billion records sold, the American singer and guitar player turned the music world upside down, breaking through the barriers between Black and White music to create his own personal rock ‘n’ roll style with his powerful, emotionally loaded voice.

Montblanc is dedicating its latest Great Characters Edition to the life and legacy of the musician whose famous live appearances and extravagant outfits ignited worldwide music culture. Created from select materials and shaped by highly skilled Montblanc artisans with great care and artistry, the collection is made up of three writing instruments, each one paying tribute to an important stage of Elvis’ career: a Special Edition inspired by his special 1968 comeback concert, a Limited Edition 1935 evoking his time in Las Vegas and a Limited Edition 98 based on the “Aloha from Hawaii” concert broadcast via satellite to 1.5 billion people across 40 countries. 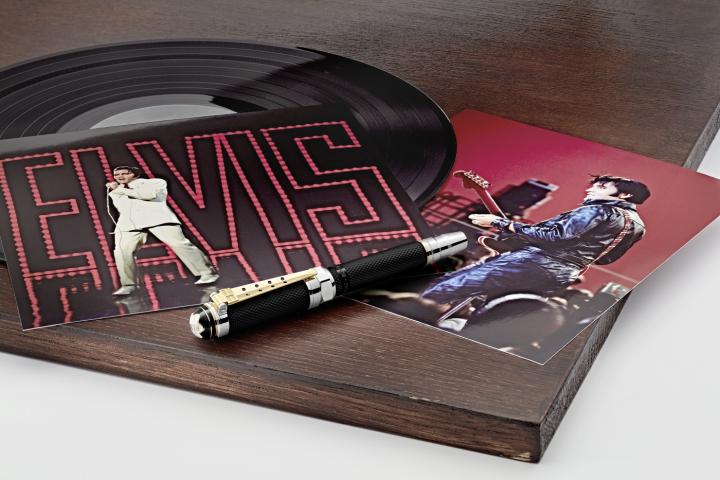 Many design details of the Special Edition are inspired by one of the artist’s great passions: cars. Elvis Presley purchased around 300 models during his life, gthe shape of a spark plug, and his quote “Ambition is a dream with a V8 engine” is embossed on the cone. The V shape of the clip and its 8-hole design reminiscent of the engine block are a further tribute to Elvis Presley’s love of cars.iving most of them away as gifts. His heart beat for sleek tail fins, ultra-comfort and powerful V8 engines with a wild sound that was like music to his ears.

The silhouette of the writing instrument is inspired by the shape of a spark plug, and his quote “Ambition is a dream with a V8 engine” is embossed on the cone. The V shape of the clip and its 8-hole design reminiscent of the engine block are a further tribute to Elvis Presley’s love of cars. 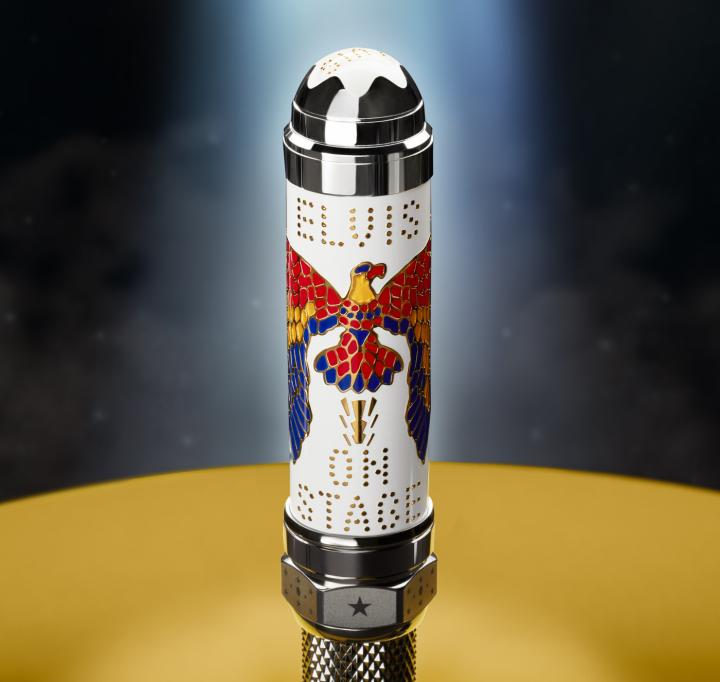 The pattern on the cap and barrel of the Special Edition, as well as the barrel of the LE 1935 and LE 98, are inspired by a ring custom-made for the famous “Aloha in Hawaii” concert. The top of the clip is decorated with the initials “EP” in reference to the design of his sunglasses. In honour of that unforgettable voice, the Montblanc emblem on the cap top is combined with the ELVIS logo, the first time the iconic emblem has been adapted. The barrel is adorned with “Elvis has left the building”, the memorable words spoken by the concert announcers at the end of numerous live appearances in the 60s and 70s informing his audiences there would be no more encores so that the crowd would leave the venue. 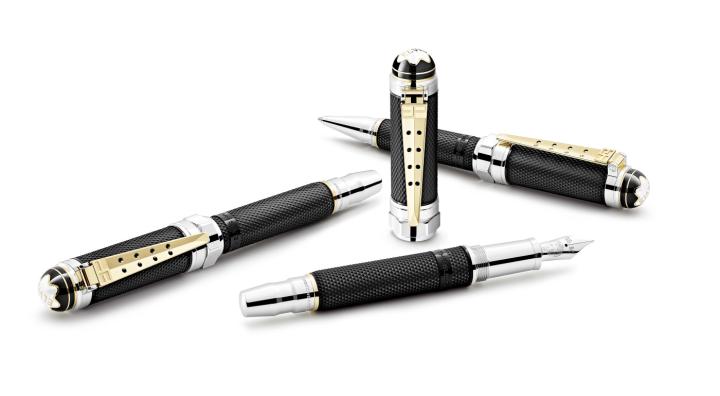 The Montblanc Great Characters Elvis Presley Special Edition celebrates the King of Rock ‘n’Roll in black precious resin – the colour of the leather suit he wore for the famous 1968 NBC “Elvis’ TV Special” – enhanced with platinum-coated fittings. For his return to the stage after being drafted to the army, he presented his early rock ‘n’ roll hits unplugged for the first time, with such power and explosiveness that this performance is viewed today as a highlight of his career.

Four years later, Elvis made history with his concert “Aloha from Hawaii – via Satellite”, the first live concert ever broadcasted by satellite. The rhomboid texture on the cap and barrel is inspired by the striking pattern on the gold ring Elvis had made for this show. The gold-coated clip evokes Elvis’s love of V8 engines with its V shape and 8-hole design, while the handcrafted hodium-coated Au 585 solid gold nib is engraved with the title of one of his many hit songs, ‘Blue Suede Shoes’. 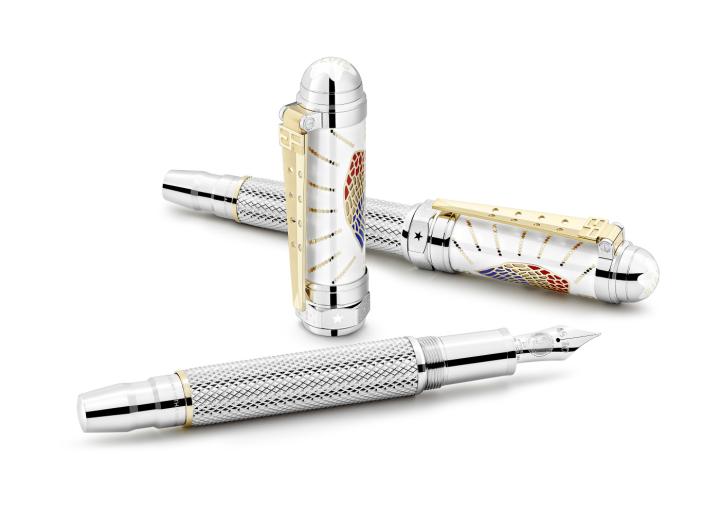 Elvis Presley imitated nobody, but rather set trends not just with his music performances but with his distinctive outfits. Everything was pure Elvis, from his tailor-made black leather suit, to his elaborate jumpsuits with high collars and waist length capes. His white “Aloha Eagle Suit” from 1973 attained a near cult status with its bald eagle, the symbol of America, glittering mosaic-like in the colours of the US flag. Limited to 1,935 fountain pens and 1,935 rollerballs in honour of the year of Elvis Presley’s birth year, the Montblanc Great Characters Elvis Presley Limited Edition 1935 celebrates Elvis Presley’s boundless charisma with a bold lacquer eagle inlay worked into the cap inspired by the cape Elvis wore during his famous “Aloha from Hawaii” performance. Each of the 246 lacquer windows is individually filled by hand with meticulous precision. The rhomboid texture features on the barrel, contrasting with the V8 engine clip in precious gold. One of his many hit songs, “Jailhouse Rock”, is engraved on the handcrafted, rhodium-coated Au 750 solid gold nib. 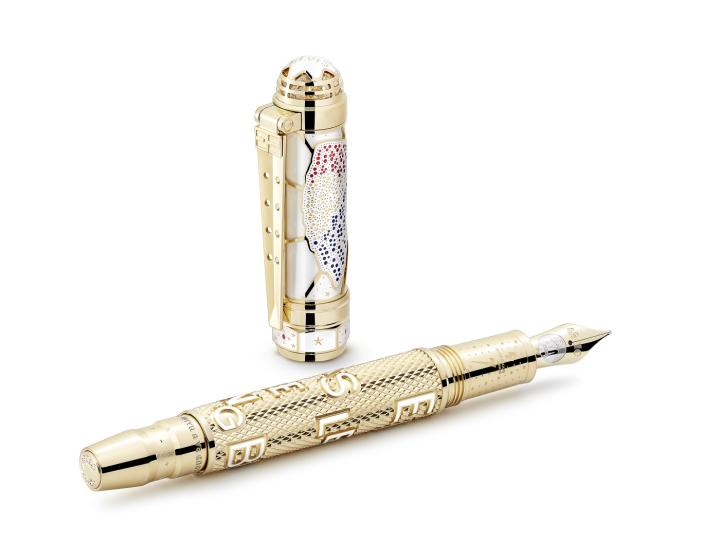 The famous “Aloha From Hawaii” performance is once again the basis for the design of the Montblanc Great Characters Elvis Presley Limited Edition 98. The cap of the Au 750 solid gold fountain pen is adorned with the eagle from his costume, representing the artist’s patriotism for America. The eagle is created using various layers of coloured lacquer inside a skeleton frame, with each individual dot then lasered out at different depths to create the different colours. The cap top features a floating Montblanc emblem with gold dust beneath. The little pillar in the centre of the dome is a reference to the “Aloha in Hawaii” concert being broadcasted via satellite, and the dust represents Elvis’s electrifying performance witnessed by millions of viewers. The barrel with the distinctive rhomboid pattern is decorated with the quote “Elvis has left the building” in contrasting letters. The Au 750 solid gold nib is embellished with an engraving of the song “Suspicious Minds”. To complete the writing experience, Montblanc is introducing a limited edition ink in Old Glory Blue inspired by the stars and stripes from his stage costumes, as well as a white calfskin leather notebook with digital print and stud design of the eagle. The incomparable style of the “King” lives on in a pair of steel and lacquer round “Elvis” cufflinks, and a steel and leather bracelet. 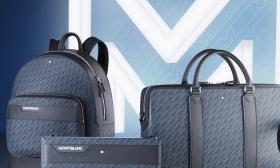 A brand new “M” pattern makes its debut on elegant and contemporary leather goods designed for a new generation of style-savvy women and (...)

A new Montblanc collection brings to life the mystery and beauty of Ancient Egyptian culture, turning writing instruments into brilliant works of (...)

Montblanc revisits its timeless leather goods collection with new leather for a softer feel and original compact design formats for both men and (...)
Montblanc