The Ladybird watch revolutionised watchmaking in 1956 by offering the world the smallest round movement of its era. Today, Blancpain pays tribute to the iconic timepiece by renaming its feminine watch collection “Ladybird”. The Ladybird Colors brings a fresh elegance through seven colourful case and strap combinations.

The Ladybird watch revolutionised watchmaking in 1956 by offering the world the smallest round movement of its era. Today, Blancpain pays tribute to the iconic timepiece by renaming its feminine watch collection “Ladybird”. The Ladybird Colors brings a fresh elegance through seven colourful case and strap combinations.
T

he soft, vibrant Ladybird Colors, available in seven variations, pays tribute to a key timepiece in Blancpain’s history. A symbol of emancipation, elegance and success, the Ladybird watch revolutionised watchmaking in 1956 by offering the world the smallest round movement of its era.

This brilliant achievement was the initiative of an audacious duo, Betty Fiechter and her nephew Jean-Jacques Fiechter. Their vision and talents resulted in numerous triumphs while jointly running the Manufacture, including several ladies’ models and the first modern diver’s watch: the Fifty Fathoms launched in 1953.

Consistently described in glowing terms, Betty Fiechter was endowed with a remarkably harmonious personality. While a dominant figure in terms of temperament and physical stature, she was also humble and gentle. Her love of watchmaking was matched only by her belief that a woman needs finery to be properly dressed. The new Ladybird Colors resembles her in all these respects; the pursuit of an ideal balance between audacity and refinement is the guiding principle that Blancpain established for the creation of this timepiece.

The white mother-of-pearl dial is adorned with slightly rounded applied gold Arabic numerals, sized to form an asymmetrical hour circle crowned by the number 12. A band of diamonds highlights the hour-markers while embracing the hands, those displaying the hours and minutes are shaped like hollowed-out sage leaves – a signature Blancpain attribute.

The red or white gold case has also been carefully designed to guarantee harmonious proportions. Its 34.9 mm diameter ensures a generous display of the watch’s finery, while at the same time offering flexibility and adjusting to a wide range of wrists. It is further distinguished by a bezel, lugs and crown set with 59 diamonds totalling over 2 carats.

A true jewellery watch, the Ladybird Colors features high-end gemsetting in which each parameter is meticulously hand-crafted. Before placing the gems in the holes created for this purpose, the gemsetters hollow out the material using scorpers to create a thin clean-cut band of precious metal (fillet) on either side of the diamonds.

Known as “recutting”, this step is important because it has a considerable influence on the brilliance of the model by producing a mirror effect. The diamonds are precisely aligned one by one so that their facets reflect the light in unison. The artisans then push back the beads formed from the precious metal over the gems to hold them in place. They then manually work the separation between the beads in order to perfect their creation. This must be done with great accuracy to avoid damaging the stones. Only the most experienced gemsetters are able to achieve the consistent separations, beads and fillets that are the hallmark of splendour and quality.

The demanding level of finishing applied to the dial and case of the Ladybird Colors is reflected in its movement, in-house Calibre 1153, which is renowned for its slenderness and its generous fourday power reserve, as well as its silicon balance spring. Rich in both structure and contrasts, it combines a circular-grained mainplate with chamfered, satin-brushed bridges adorned with a Côtes de Genève motif. So as to offer the clearest possible view of these aesthetic details, Blancpain has developed an openworked gold oscillating weight, matching the circular patterns of the watch face. Viewed from both front and back, this model sparkles thanks to a rose-cut diamond fitted on the crown.

The Ladybird Colors marks the dawn of a new era for Blancpain’s feminine watch collection. It brings a fresh elegance through seven colourful case and strap combinations. According to personal preference, the red gold model is available with a choice of peacock green, midnight blue or satinwhite alligator leather strap, while the white gold version can be paired with a lemon yellow, tangerine orange, lilac or satin-white alligator leather strap. This array of colours, which inspired the model’s name, symbolise diversity, enthusiasm and joy. Each wristband is fitted with a gold pin buckle or folding clasp set with nine diamonds.

From 1930 onwards, Blancpain played a pioneering role in the history of feminine watches by presenting the first self-winding wristwatch for women, the Rolls. In 1956, the Brand unveiled the Ladybird model, which was equipped with the smallest round movement of the time. Convinced that women appreciate the expertise and magic of mechanical watches, the Maison constantly innovates by creating movements dedicated to women, notably endowed with horological complications previously reserved for men.

Blancpain’s epic saga of feminine watches cannot be separated from the determination of a woman, Betty Fiechter, who became the first female to head a watchmaking company in 1933. Her intelligence and visionary spirit paved the way for jewelry watches at Blancpain and furthered the brand’s international reputation.

Today, the brand pays tribute to the iconic Ladybird timepiece by renaming its feminine watch collection “Ladybird”. The refined and innovative Ladybird collection faithfully reflects Blancpain’s timeless values. Finished exclusively with mechanical movements decorated and assembled by hand, these watches offer a perfect blend of elegance and horological complexity. Far from being merely reduced-sized or adapted versions of men’s watches, Ladybird timepieces are specifically developed to meet the wishes and expectations of contemporary women. Watchmaking know-how and cuttingedge technologies are thus devoted to the cause of beauty. 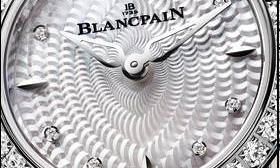 Amid the current renewed craze for tiny ladies’ watches, Blancpain reinvents the enchanting design codes of the Ladybird in an ultra-thin contemporary (...)
FOR MORE

As the exclusive watch and jewellery partner to The 355, Piaget’s iconic collections such as Altiplano and Possession, as well as the finest High Jewellery (...)