A colour combination emblematic of the style of Cartier since the 1920s, Tutti Frutti brings the Udyana necklace alive. It forms a rich canopy of ribbed emerald balls studded with rubies and topped with an impressive 67.7-carat engraved ruby pendant from Mozambique.

A colour combination emblematic of the style of Cartier since the 1920s, Tutti Frutti brings the Udyana necklace alive. It forms a rich canopy of ribbed emerald balls studded with rubies and topped with an impressive 67.7-carat engraved ruby pendant from Mozambique.
C

reated in the High Jewellery ateliers of Cartier, the Udyana necklace, a one-of-a-kind piece, takes its name from the Sanskrit word for garden. It celebrates nature at its most luxuriant and colourful, through a profusion of motifs and precious stones including sapphires, rubies and engraved emeralds. For Cartier, the necklace not only represents a continuation of expertise, but also the Maison’s tradition for transformable jewellery that can be worn in multiple ways.

The Udyana necklace forms a rich canopy of ribbed emerald balls studded with rubies and topped with an impressive 67.7-carat engraved ruby pendant from Mozambique. In addition to its impressive weight, the stone is a fascinating pinkish red colour with a touch of orange. Its uniqueness lies in the hexagonal shape which provides an ideal space for the carved floral motif. This engraving is entirely carried out by hand, using a technique developed by the Mughals in the 17th century. 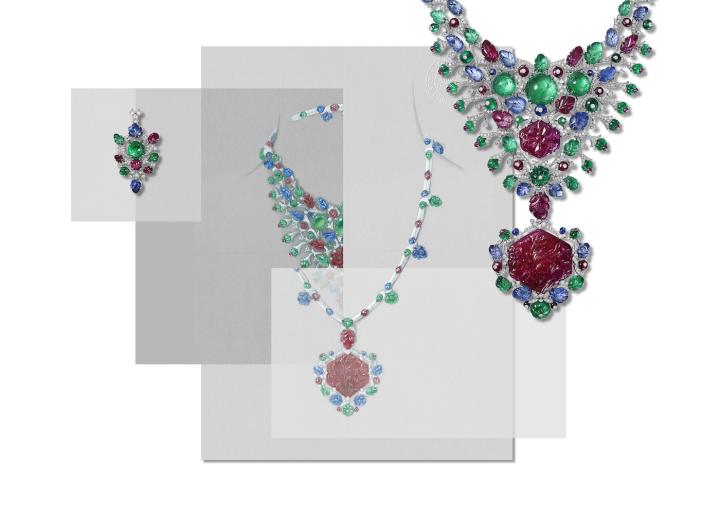 When it comes to selecting coloured stones, a quest for excellence dictates Cartier’s choices each time. The jeweller is looking for an extra something that will allow for a dialogue between the stone and the creator. What story does it tell; where does it come from; what does this emerald cut into a ribbed ball, this sapphire or this flowered ruby evoke? The stones inspire Cartier, which in turn offers them an appropriate setting for their beauty. 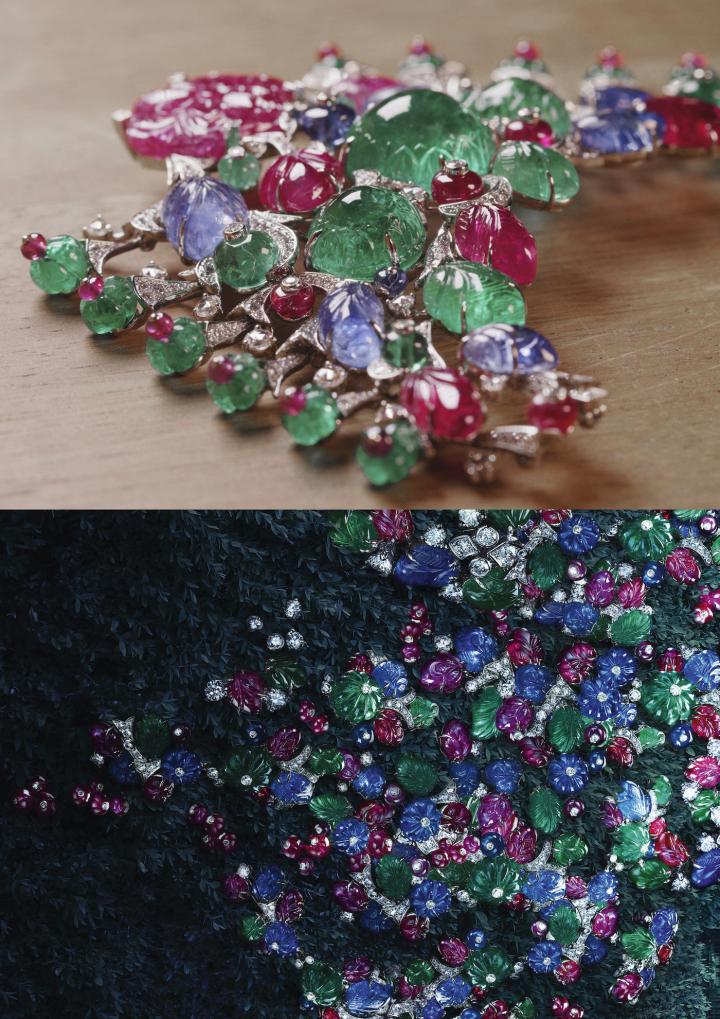 Each of them must meet the highest standards of excellence and quality set by the Maison’s experts. It’s a duty and a responsibility, both social and environmental, pioneered by Cartier as an early adopter of responsible commitment in terms of sourcing coloured stones.

Cartier is a founding member of the Responsible Jewellery Council (RJC), an organisation created in 2005 that sets the standard in social and environmental responsibility for the jewellery and watchmaking industry. old, diamonds, platinum, silver and coloured stones are all included in its scope of certification. 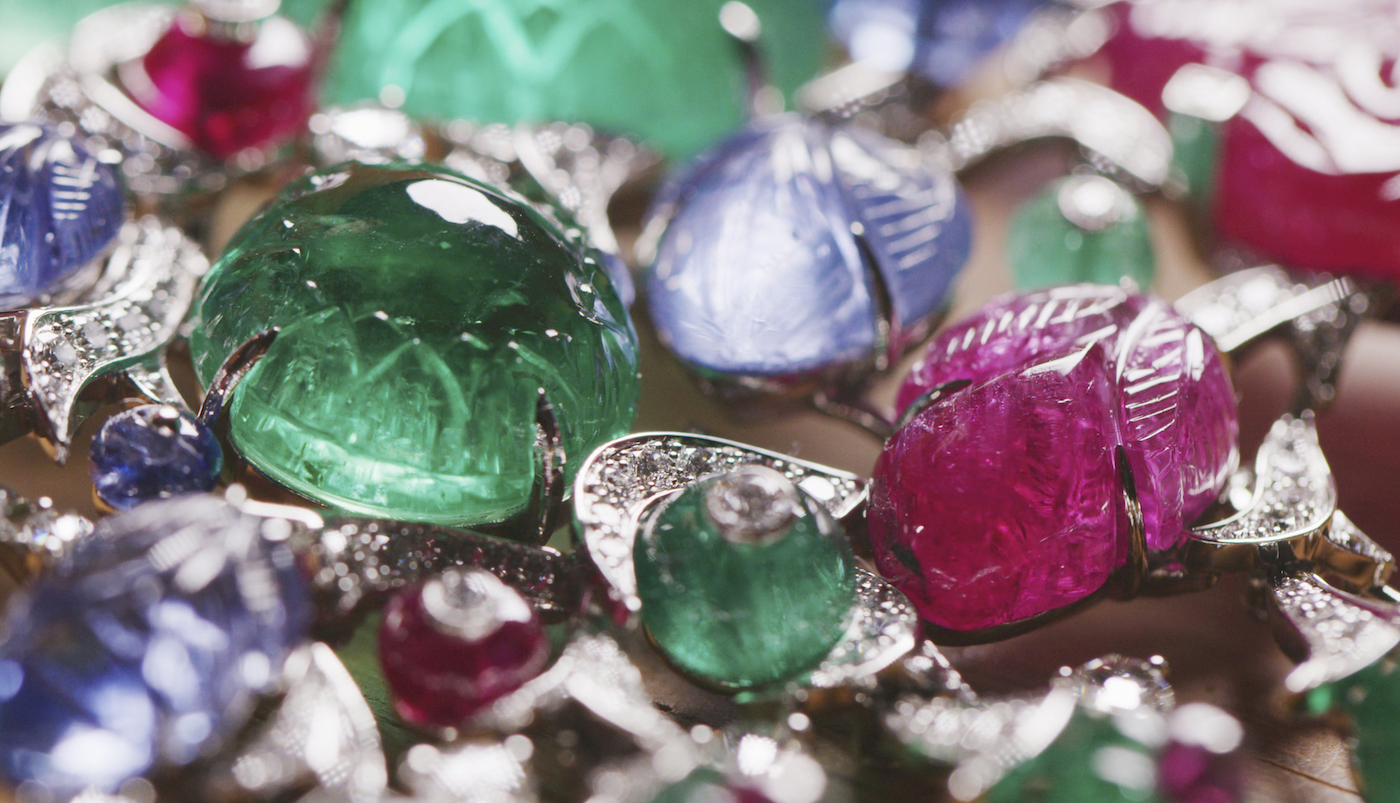 Ribbed and gadrooned balls, rubies and emeralds engraved in the shape of leaves, flowers and berries all bear witness to the Mughal dynasty that ruled northern India until the 18th century. Great lovers of ornaments and precious stones, the Mughals employed the expertise of Indian artists, the only ones who knew how to cut emeralds, sapphires and spinels in relief and engrave them in the imperial workshops of Rajasthan. All these stones, emblematic of traditional Indian jewellery, inspired Cartier to create colour combinations that had never been seen before, using red, green and blue. 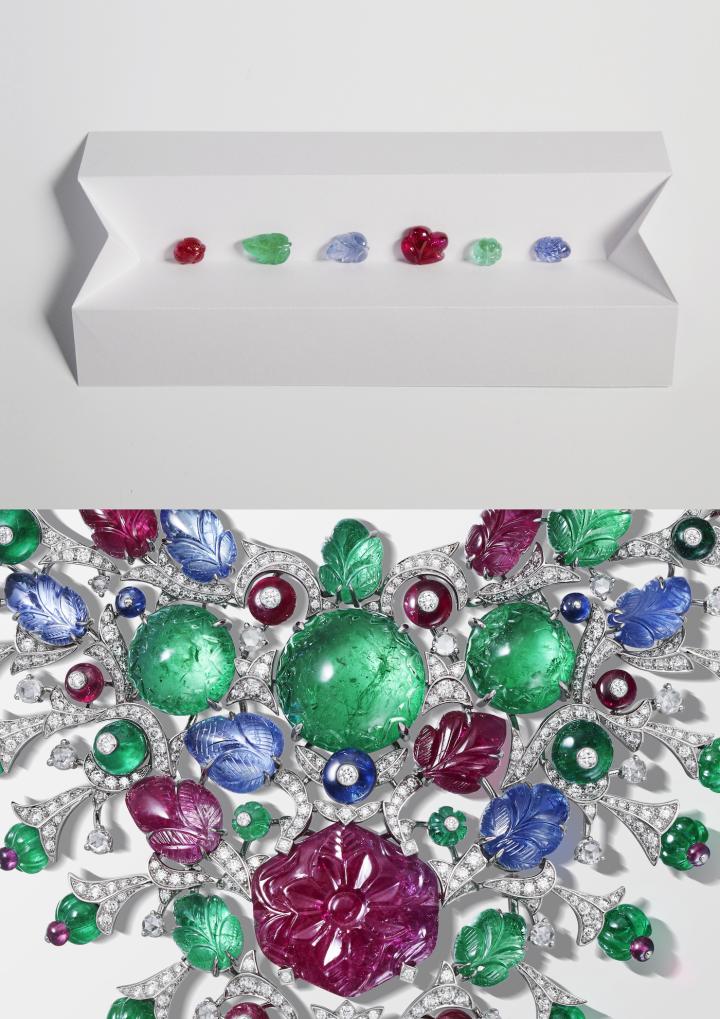 In the 1970s, the creative genre took on the name Tutti Frutti and became so closely associated with Cartier, that the Maison patented it in 1989. In 2016, the Maison created a Tutti Frutti style High Jewellery necklace named Rajasthan for one of the most opulent states of Mughal India, featuring a 136.97-carat engraved emerald from the mines of Colombia. It was followed in 2019 by a new set, the Maharajah necklace, which pays tribute to the great ceremonial necklaces of Indian princes, with an exceptional set of emeralds. In 2021, came the Udyana necklace, characterised by its intense colours and engraved ruby.

Harmony of composition and the naturalness of the branches and buds was a priority for the workshops that created the Udyana necklace. The challenge began with the design, and how to associate the cut and engraved stones. Each stone then required a jeweller to make a bezel to size by hand, for insertion into the veins of the leaves. 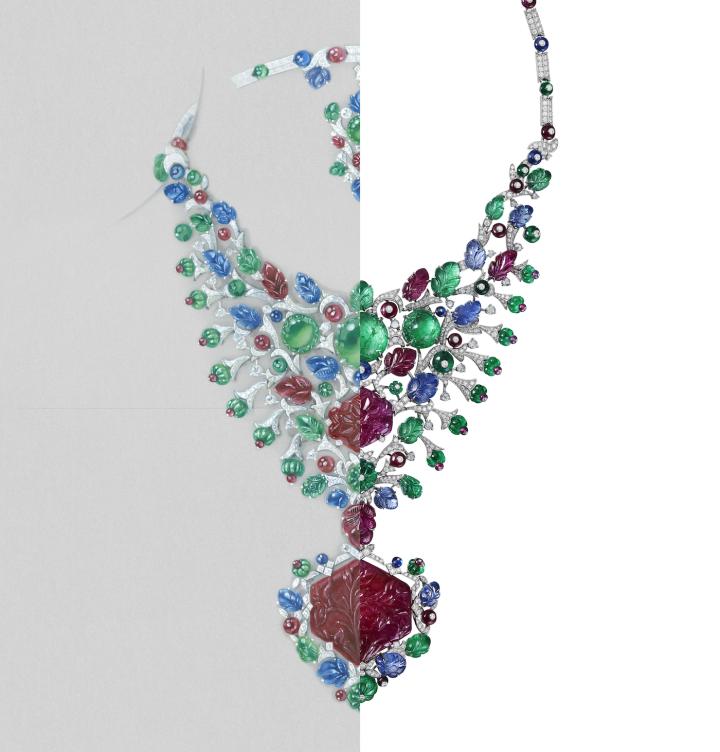 The leaves themselves were linked by a tree of diamond-set stems, each of which is different, to maximise the naturalness of the whole. Added to this jewellery prowess, is the complexity inherent in any transformable piece, designed to be worn in several different ways. A pendant to be worn alone, a brooch, and necklace all in one, the piece is designed to be changed as desired without any visible engineering, whilst the whole remains secure. The pendant can be detached and fixed on a chain, while the main necklace can be worn as is, and the back pendant can be worn as a brooch. 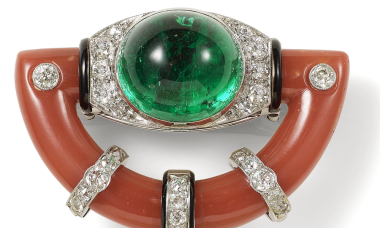 The decade between 1920 and 1930 was one of the richest and most beautiful eras for high jewellery. The great names of the Place Vendôme vied with each (...) 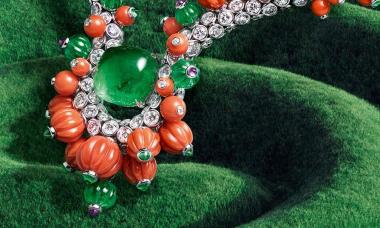 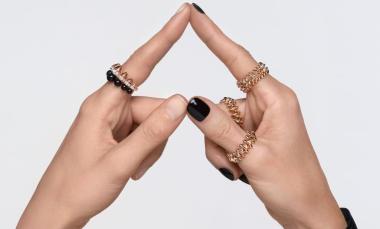 The latest creations amplify the dualities within Cartier’s codes, playing with duplication and textural counterparts to create a visual language of rhythm (...)
Cartier

An introduction to the Solstice collection by Piaget

Excellence is nothing without playfulness! The articulated Precious Adornment necklace matches the movement and adaptability of a precious gown; the (...)

The Dutch designer received the first prize in the ‘Personalized Jewelry’ category for her Calendarring at the annual INSTORE Design Awards. This special (...)

The award-winning jewellery designer and President of Formula 3D corporation has announced the official launch of 925 sterling silver for 3D printing of (...)

PColoured gems are growing in popularity and importance. They grant a piece of jewellery character and demonstrate individuality, personality and style. (...)