Nardi is an ambassador for Venice, capturing the city’s special beauty in its jewels, which now include brooches, rings and cufflinks for men, in the shape of a lion, the symbol of the Serenissima. Alberto Nardi, at the head of the century-old family firm, talks about what makes Nardi unique.

Nardi is an ambassador for Venice, capturing the city’s special beauty in its jewels, which now include brooches, rings and cufflinks for men, in the shape of a lion, the symbol of the Serenissima. Alberto Nardi, at the head of the century-old family firm, talks about what makes Nardi unique.
M

ore than a name, Nardi is a world in itself; the encapsulation of its birthplace, Venice, where the jewellery house was founded more than a hundred years ago. Successive generations have continued to capture the spirit of the Serenissima in each collection.

The story begins in 1920 when Giulio Nardi, a Florentine goldsmith with a passion for precious stones, opened his business on Piazza San Marco. Giulio worked with silver and crystal, crafting just enough for his small boutique, which occupied a single arch of the square’s arcades. Since then, Nardi’s premises have expanded but customers still enter through that same archway.

Giulio had a deep appreciation of beauty and was soon searching for new ways to express this by introducing gold and gemstones into his designs. Nardi reached the height of its renown in the years following the Second World War. The world had stepped from darkness into light, and Fellini’s 1960 film La Dolce Vita gave its name to the hedonistic lifestyle embraced by jet-setting celebrities and socialites.

Venice became a favourite destination for the rich and famous, who crowded into Nardi’s boutique. Elizabeth Taylor was a patron, as were Grace Kelly, Marilyn Monroe, Ernest Hemingway and Joe DiMaggio, to name but some. The jeweller’s was also frequented by European aristocracy, from Paola, Queen of Belgium, to the crowned heads of Spain and Greece. 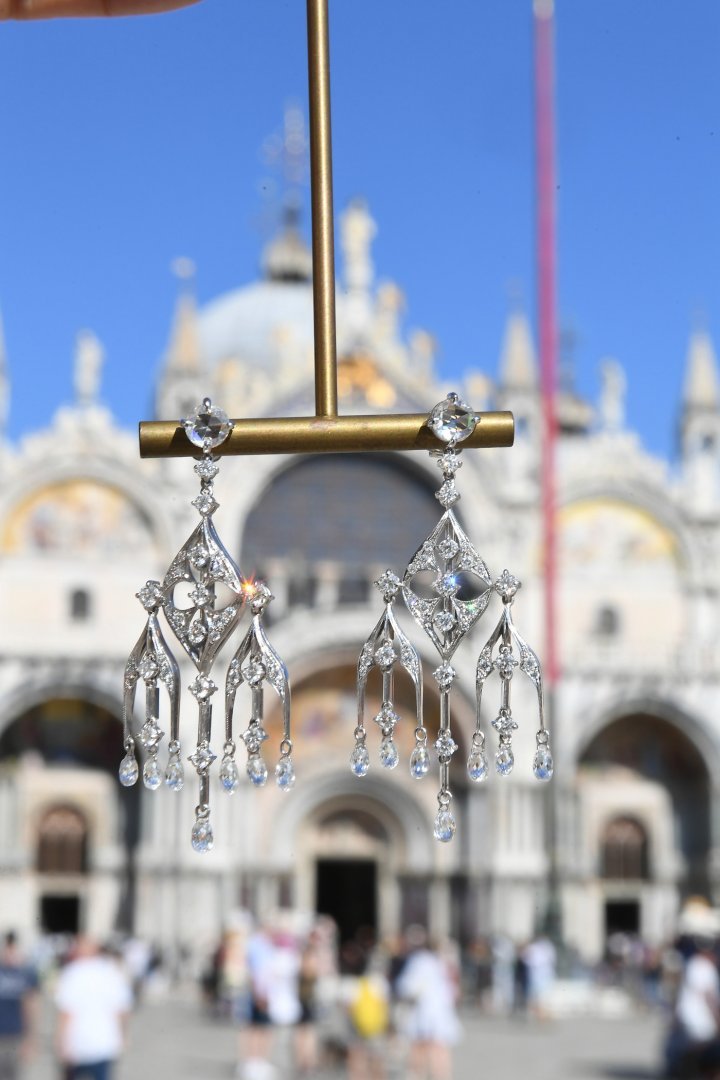 In 1920 Giulio Nardi, a Florentine goldsmith with a passion for precious stones, opened a small shop on Piazza San Marco in Venice. Today’s customers still enter the shop through that same archway.

The jeweller’s success lies with its ability to capture the essence of Venice in its creations. Wearing one of Nardi’s colourful jewels is like having a little piece of the Serenissima for oneself. They conjure up the mosaics of St Mark’s Basilica, beautiful Murano glass, the city’s magnificent buildings, but also Venice’s role as a gateway to the East. Every piece of Nardi jewellery tells something of this dangerously beautiful city.

Antonio Nardi, who represents the third generation at the head of the firm, is reviving the tradition of men’s jewellery with a collection of brooches, rings and cufflinks in the form of a roaring lion: a nod to the winged lion of Saint Mark, which is the symbol of the city of Venice. nt un lion rugissant, en honneur au fameux lion ailé de Saint-Marc, symbole de la ville. 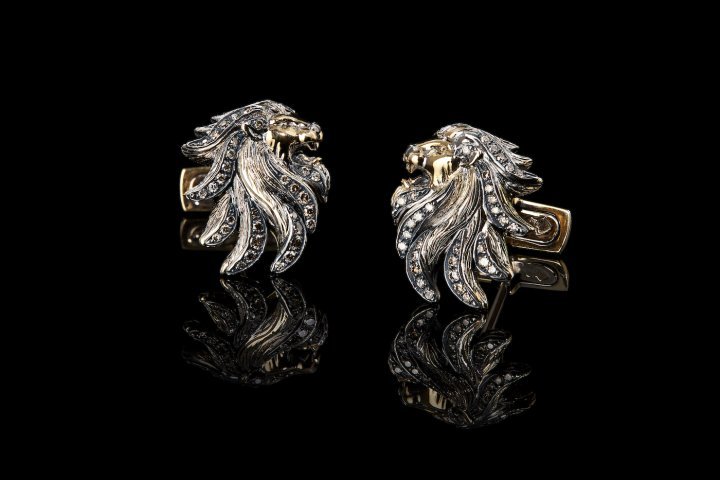 To show off these creations, he has enlisted the talent of Cifonelli, an institution for bespoke tailoring, located at 31, Rue Marbeuf in Paris. A brooch by Nardi is a marvellous companion to a specially designed double-breasted evening jacket in a rich purple velvet. We met Alberto Nardi and talked with him about what sets Nardi apart from other jewellery houses.

Every piece of Nardi jewellery tells something of this dangerously beautiful city.

Europa Star: How would you define the spirit of Nardi?

Alberto Nardi: If I had to answer in one sentence, I would say our philosophy is to be unique.

You are a graduate of the Gemological Institute of America. What made you take over the company founded by your grandfather, Giulio Nardi? Was it a passion for jewellery or a sense of duty?

Let me be clear about one thing. From my earliest childhood, it was my dream to take over at the head of the company. And not because this is a family business. I’m an impassioned individual. When doing something, I like to follow my ideal. My grandfather was a hugely charismatic man who would sometimes ask one of his employees to pick me up from school and take me back to the shop. I adored spending time with him. He would sit at his desk and show me precious stones and sketches for jewellery. It was always my dream to follow in his footsteps. 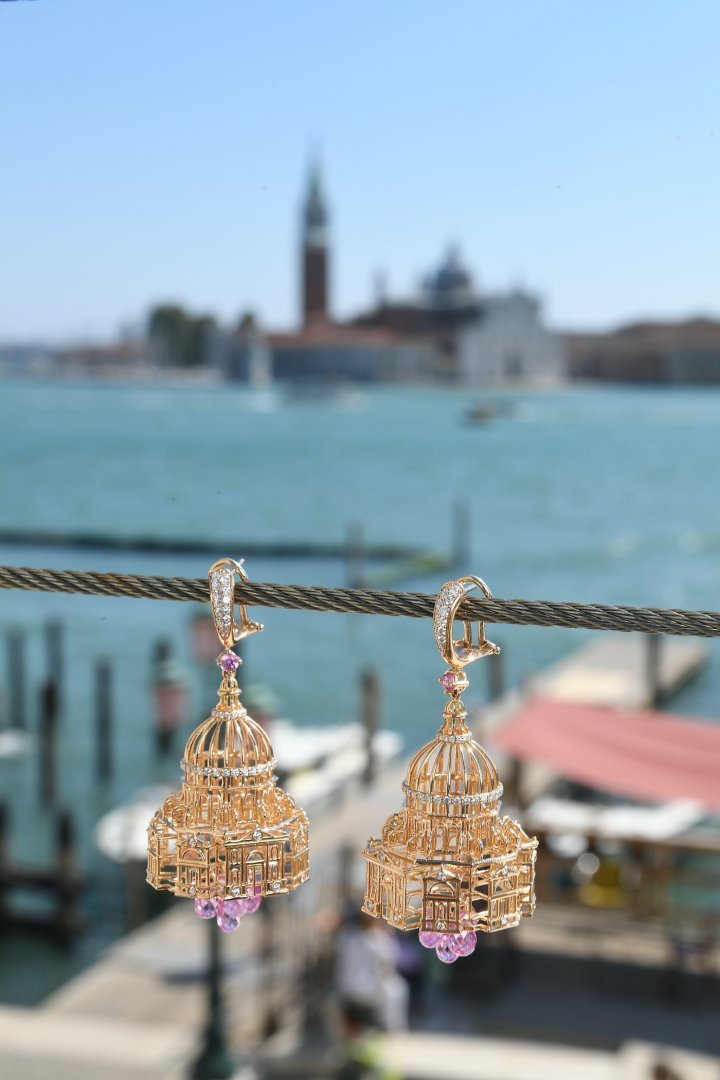 Nardi’s identity is entwined with Venice.

There is a powerful connection between our company and Venice. I adore my city, even if it can be something of a love-hate relationship, and enjoy the idea of conveying its spirit in a piece of jewellery. In a way, our creations are ambassadors for the beauty of Venice.

During lockdown, we saw a different Venice, empty of tourists and surrounded by clear water. Did this become the inspiration for new designs?

Absolutely. Our Basilica Della Salute earrings were inspired by this period. The church of Santa Maria della Salute was built in the seventeenth century as a votive, when an outbreak of the plague devastated the city and killed a third of its population. These earrings resemble a birdcage fashioned from gold wire. They are our ex-voto.

Your jewellery is instantly recognisable. At a time when globalisation has reached even the jewellery market, how do you stick to a certain line of conduct?

I took a decision years ago, when I’d just started working at the company. I told my father I didn’t want to sell jewellery by anyone else and I didn’t want to make watches. I intended to remain a pure jewellery player, as was the tradition at the turn of the last century, but using the techniques of today. We are one of Europe’s last independent jewellers. It’s not an easy position to be in. We don’t have the backing of a group, but this is who we are.

You mention groups. Have any tried to buy you out?

We did receive an offer from an Austrian group that wanted to buy a stake in the company, but my father and I turned them down. No later than last year two investors – one based in Switzerland and the other American – wanted to buy their way in. No doubt there will be a day when we decide to sell a share but that day has yet to come. I don’t aspire to make Nardi a global brand. We are a small, elegant, niche label. I can have control over every aspect of our activity. I’m convinced this is something our customers appreciate. 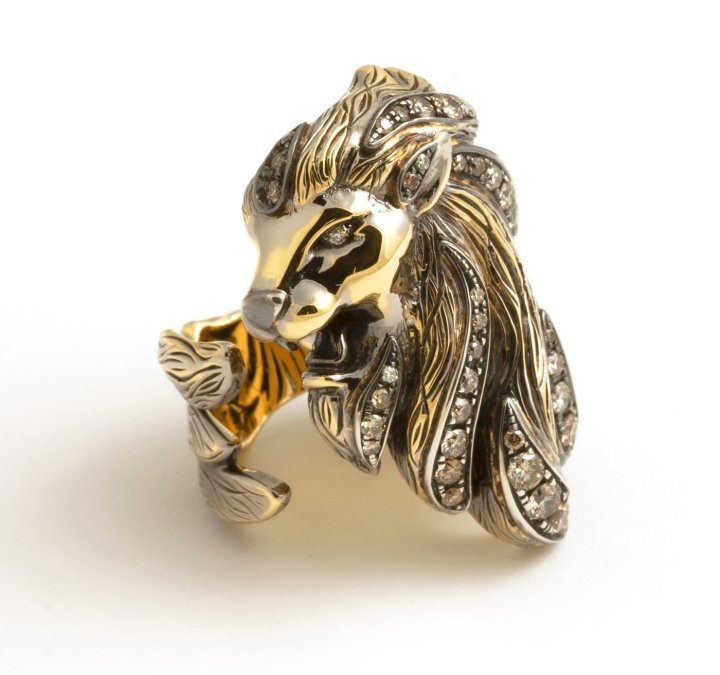 “I don’t aspire to make Nardi a global brand. We are a small, elegant, niche label. I can control every aspect of our activity.”

A piece of jewellery can be seen as an adornment, a talisman or an investment, among other things. What goes into your jewellery?

So much goes into the jewellery we create! The most important aspect to my mind is its role as a talisman. Why do men and women wear jewellery? It’s not like food or water; we don’t need it to survive, yet a piece of jewellery can fill us with strength or faith or love. It’s important for a jeweller to convey this aspect to their customer, not simply discuss the carat weight of a stone. Jewellery has symbolic value, too. Look at this ring. My grandfather imagined it in the 1960s and it’s entirely handcrafted. It’s called the Desdemona, after Othello’s wife in Shakespeare’s The Tragedy of Othello, the Moor of Venice. It borrows from the tradition of poison rings. It’s a thought-provoking, symbolic piece of jewellery that deserves to be explained to customers. 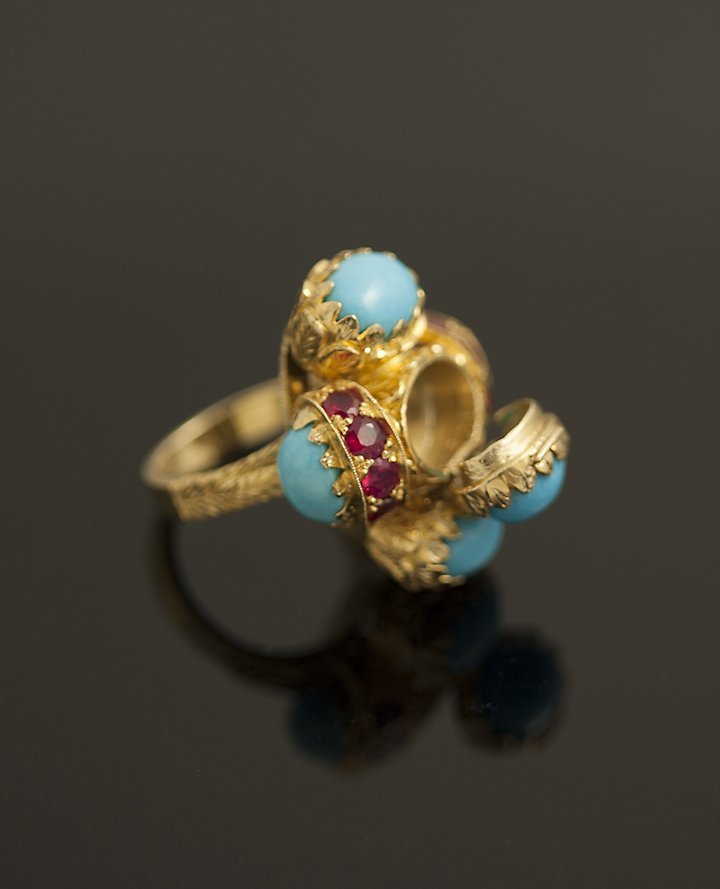 Historically, men in positions of power wore jewellery, which later became adornments for women. Why, like other brands, are you reviving this tradition of men’s jewellery?

I think the time is ripe. It’s not an easy thing to do. Men’s jewellery can be seen in a negative light, perceived as too showy or feminine. We’ve chosen to create jewellery for the dandy, with a generous brooch in the shape of a lion, along with cufflinks and a ring. It’s the beginning of a new chapter for us. 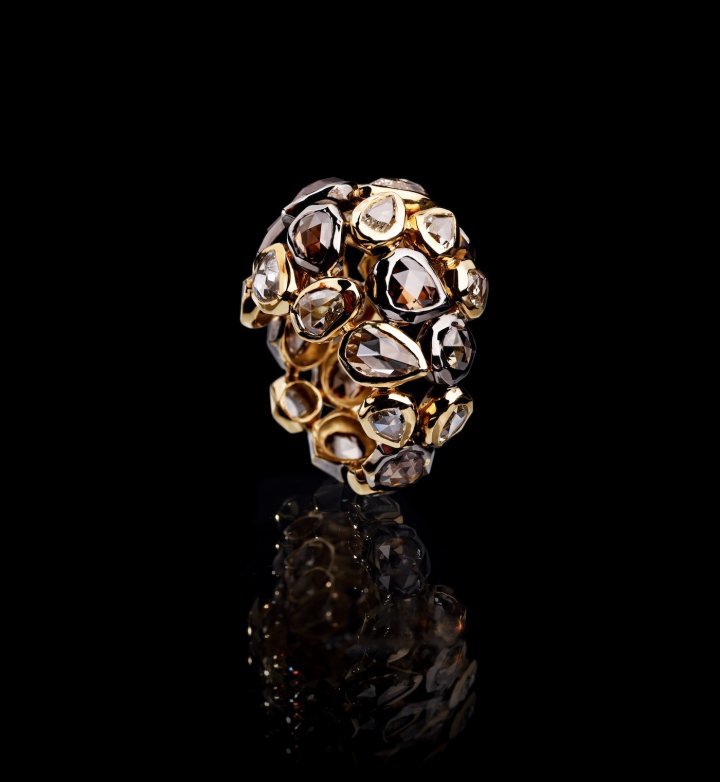 What about you? What kind of jewellery do you wear?

I wear cufflinks and occasionally a brooch. I want to make jewellery I find pleasing and can wear myself. If I were a woman, I’d be Nardi’s number-one ambassador.

“The time is ripe to revive the tradition of men’s jewellery. We’ve chosen to create jewellery for the dandy. It’s the beginning of a new chapter for us.”

The innovative start-up Provenance Proof has launched the first online marketplace for traceable gems. A first in the industry, it allows buyers and (...)