The brand is organising a high jewellery exhibition centered on these key signatures of the Cartier style, open to the public from 11th to 18th December at its boutique at 35 rue du Rhône, Geneva.

The brand is organising a high jewellery exhibition centered on these key signatures of the Cartier style, open to the public from 11th to 18th December at its boutique at 35 rue du Rhône, Geneva.
F

ully renovated after several months of work, Cartier’s boutique on the shores of Lake Geneva, set within a Brutalist building designed by architect Pierre Braillard, devotes all of its new spaces to almost 400 exceptional pieces, all linked by how they illustrate the Cartier style.

Capital of expertise and excellence, Geneva has provided the ideal location for housing the Cartier Collection since 1983. Formed of more than 3000 pieces dating from 1860 to 2000, it is a unique compendium. This pioneering Collection has since been the subject of numerous exhibitions organised across the world, from the Musée du Petit Palais in Paris to the Hermitage in St Petersburg, the Metropolitan Museum in New York and the Tokyo National Museum. For almost thirty‑five years to today.

Focussed on the timeless qualities of the Maison’s creations, the Cartier Tradition department curates items of jewellery, watches and clocks, and precious objects for a distinct clientèle of collectors. Each creation is carefully selected, then authenticated by the Maison’s experts, using archives. It is then meticulously restored by specialist jewellers and watchmakers, who preserve and perpetuate traditional forms of expertise.

Every year, Cartier releases a High Jewellery collection composed of unique pieces. These collections serve to continuously enrich the aesthetic vocabulary of the Maison. The creation of these exceptional pieces is guided by a vision of beauty, harmony of proportions, bold contrasts and curiosity. They each have an intrinsic technical virtuosity – invisible yet omnipresent – devoted to aesthetic perfection.

An exploration of beauty, and the enhancement of light: those are the two major axes that have formed the Cartier style since the early 20th century. It is marked by four signatures which are intrinsic to the Maison, and for which jewellery provides the most spectacular of vectors.

Architecture and minimalism, Geometry and contrast, Flora and fauna, and Cultural dialogue form the Maison’s key territories for expression, which remain as vital as ever with Cartier incorporating them into each of its new creations, however diverse they may be. The Maison’s styles have their own history, expertise and devotees. So distinctive, they shape the identity of Cartier, recognisable at the very first glance. 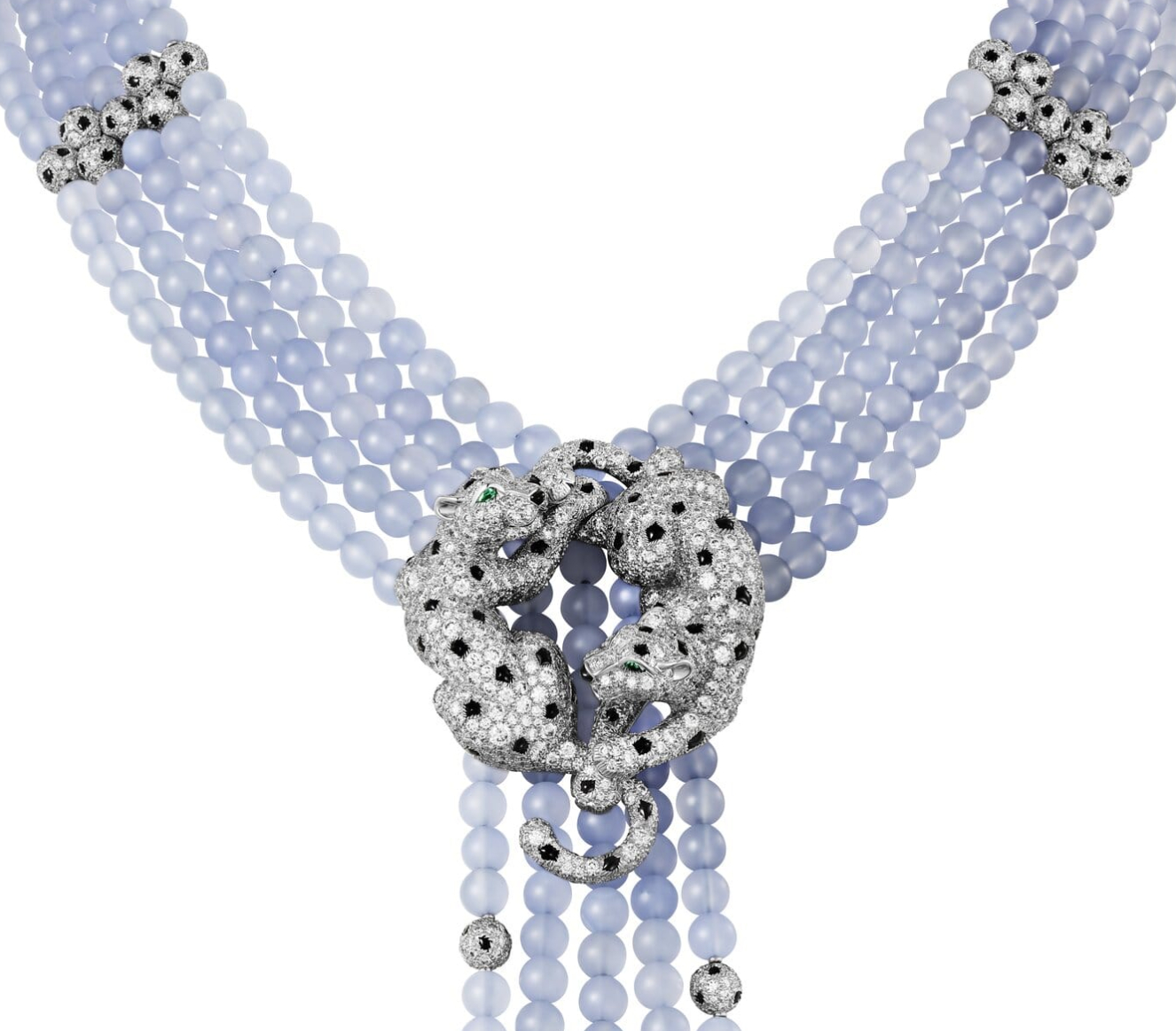 Like an architect, Cartier directs light to reveal the brilliance of the Diamond.It was platinum that allowed the jeweller to revolutionise the use of diamonds. Louis Cartier was the first to use it regularly for his pieces, at the very end of the 19th century.Stronger than other precious metals, its resilience allowed the creation of more delicate pieces than ever before: He compared this to embroidery". The stones were freed from their imposing gold or silver settings, revealing all the light hitherto eclipsed. Add to this the fact that platinum’s brilliance does not fade over time, enhancing that of the diamonds, which sparkle as never before under the newly installed electric lights. The appearance of platinum went hand in hand with the introduction of the Garland style.

Rejecting the excesses of Art Nouveau, Louis Cartier honed his own aesthetic, inspired by 18th century France. He was drawn towards the architectural motifs of the time. The ornamental repertoire of the Neo‑Classical period dovetailed with that of the jeweller: iron filigree, trimmings, floral garlands, foliage arabesques or intertwining scrolls – as we can see here 17on this Cartier Tradition piece – provided a range of stylistic motifs for highly refi ned jewellery.Delicate and ethereal, timeless in its design, yet innovative in the use of platinum, this new style of jewellery was an immediate success, helping the Maison to enhance its international reputation, from Paris to St Petersburg, London and New York. Louis Cartier had now laid the foundations for the Cartier style.

Like an architect, Cartier uses the cut of the stones to create constructions which alternate solid surfaces and recesses to outline or emphasise the form of a ray of light or shadow.Like an architect, Cartier plays with the properties of materials such as diamond and rock crystal, which allow the jewellery creations to expand to fi ll the physical space. The actresses of the silver screen understood this power well, echoing the white of this monochrome world, as Gloria Swanson did in the fi lm Perfect Understanding (1933) when she added two Cartier crystal and diamond bracelets to her wrist.

The Maison has always had a passion for the World and its cultures, exploring the diversity this off ers. China, the Middle East, India, Egypt, Russia... For over a century, all of these territories served to inspire Cartier. This interest and curiosity are the legacy of a long affi liation. Alfred, the Maison’s founder, was a scholar of Oriental languages. Later, his three grandsons, collectors, aesthetes and intellectuals, started to build creative bridges between cultures at the start of the last century, and Cartier has enriched these over time.The worldly curiosity of Jacques, one of the Cartier brothers, took him to India in 1911. There he discovered the ancient art of stone lapping, original motifs, and the opulence of Indian princes. Floral compositions of cut stones – emeralds, rubies, sapphires – engraved with motifs of flowers, fruits and palmettes, inaugurated a new style which was later named “Tutti Frutti”.

Inextricably linked with the Cartier style, geometry and contrast are still the subject of ongoing creative research, which delves ever deeper, exploring the domain of kinetic art. Cartier makes use of these graphic codes in its contemporary collections to suggest movement and confuse the eye.As early as the turn of the 20th century, when the Neo‑Classical‑inspired garland style was at its height, the Maison’s designers, at Louis Cartier’s behest, turned their focus to abstract and geometric forms. In 1903, they introduced vivid colours and brand new forms: simple cubes, polygons, and rhombuses in calibrated coloured stones. Emerging alongside the birth of Cubism, this style, dubbed “modern”, introduced geo‑metry and contrast to the Cartier grammatical framework and, more broadly, into jewellery and the decorative arts, before the advent of Art Deco.

Taut lines, lively details, geometric forms, mirrored construction, the graphic motifs of the Imperio necklace are further accentuated by the colour contrast created by the black onyx and the green emeralds. This colour combination has featured in the Maison’s stylistic repertoire since 1910 as it heightens the sense of perspective.All elements are designed to confuse the eye, drawing it towards the central stone: an exceptional flawless emerald from Colombia, weighing 23.55 carats. 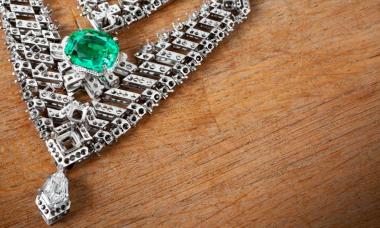 With the Imperio necklace, Cartier continues its reflection on movement: how do you give rhythm to a composition and create a sense of speed? To answer (...)

A colour combination emblematic of the style of Cartier since the 1920s, Tutti Frutti brings the Udyana necklace alive. It forms a rich canopy of ribbed (...)
Cartier

Omega introduces a trio of exceptional timepieces with sun-brushed dials and matching-coloured straps in shimmering leather.