The audacious gems of a Madrid-based jewellery designer at the start of his career are signalling a master in the wings. Titanium sculptures take flight and explore underwater realms to bewitch the viewer with their scale and vitality.

The audacious gems of a Madrid-based jewellery designer at the start of his career are signalling a master in the wings. Titanium sculptures take flight and explore underwater realms to bewitch the viewer with their scale and vitality.
W

allis Hong is only 27 but his childhood memories speak of a magical and sinister garden paradise that seems sprung from the pages of a centuries-old legend. “My biggest wish is that my art pieces perfectly interpret my inner world,” he says. “And, when people see my work, that they can feel their own different connections with it.”

And what a finely wrought otherworldly order his is. Jostling with vivid, fairytale recollections of his early life in a rural idyll in southeast China, the Madrid-based creative brims at interview with futuristic concepts, largely expressed, at the moment, in titanium sculptures that seem to move on the body, such is their electrifying colour and resemblance to nature’s breathing beauty. 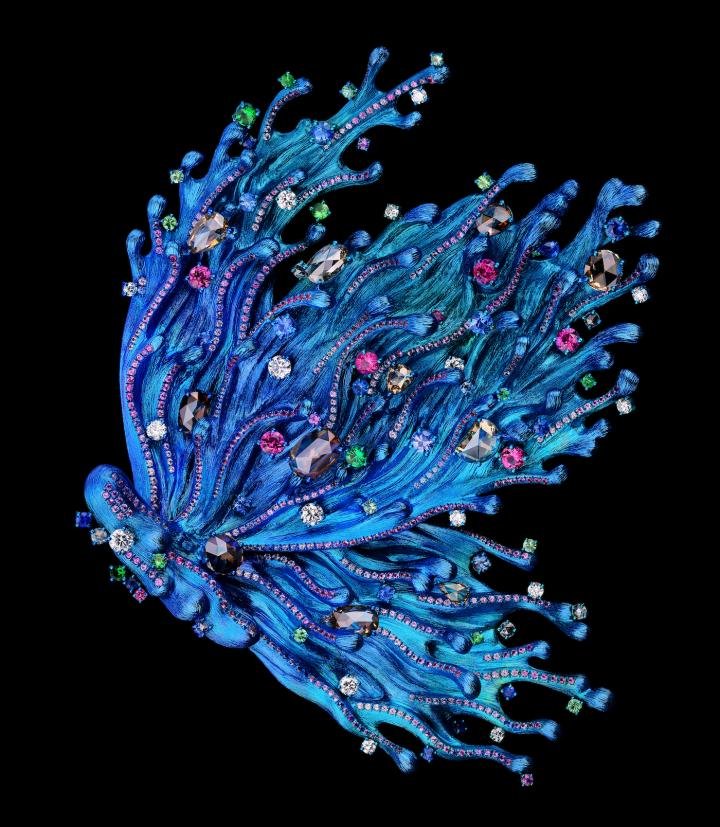 Wallis Hong “Eternal Butterfly I” is a remarkably proportioned brooch that captures the flying side view of a butterfly that glistens with precious droplets, collected on its surface as it moved through a watery cave.
4.96ct Brown fancy rose cut diamonds, 1.33ct Round cut white diamonds, 7.12ct Coloured sapphires, 1.10ct Tsavorites Pearl in the back, Titanium (Size: 10.3cm x 9.5cm; Weight: 43.4g)

His two Eternal Butterfly brooches took three years to bring to light and make what sounds like a waking dream tangible on the jeweller’s bench. When Wallis was six, he was chasing butterflies in a field near a waterfall cave, close to his home in the remote hamlet of Manchon, in Guangdong Province, when a massive butterfly with a blue-yellow gradient on its wings suddenly emerged from the cave. “The droplets on the butterfly were reflected in the sunlight hues like the colour of gemstones,” he recalls. “And it was as if time was suspended.” 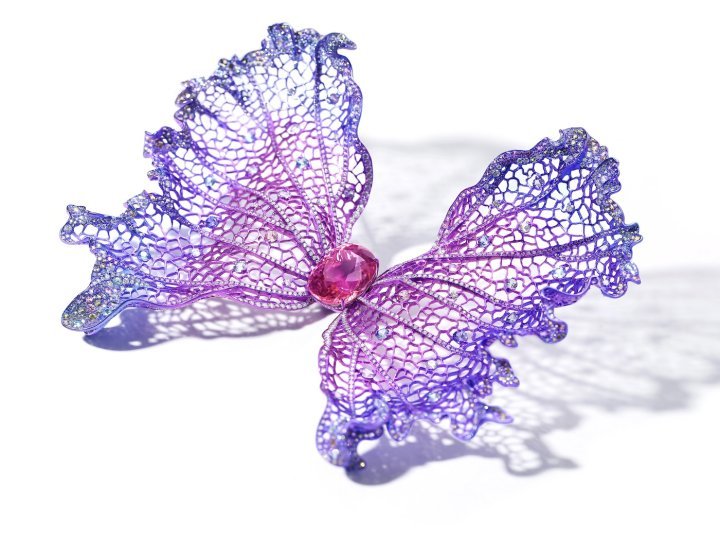 He had actually tried to catch the creature and nearly succeeded a few times, but is glad now he failed, especially since his audacious butterfly pair have made the mysterious experience eternal – a somewhat bittersweet achievement because the place where his house had stood and that he used to run around freely, leading the area’s children on adventures, is now the site of a highway.

“Every time I create a new butterfly, I feel closer to the one from my memories. The life of a butterfly is beautiful and short; all of nature’s creatures should be appreciated rather than possessed.” 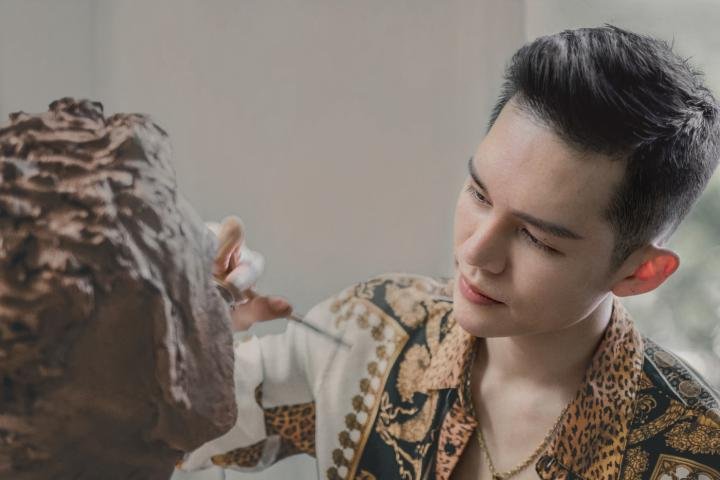 Since his arrival in Europe in 2016, Wallis has studied a variety of art forms such as sculpture, at the Madrid Academy of Art.

A familial home under starry moonlit skies, at the foot of a mountain, and thriving with nature evidently shaped an awareness of all creatures and plants, including dangerous mushrooms, poisonous snakes, red carp and the most tentative germinating sprouts of life.

But Wallis’s retellings of his encounters as a boy are quite out of the ordinary. Once his mother told him not to move because a huge spider was hovering above his head. She quickly reached for a broom, waving it in the air to knock the insect to the ground: “The spider provocatively charged towards her in anger and, when it was hit, it was like a magic effect – thousands of small spiders spread out on the ground like water dispersing. It was terrifying and mesmerizing.”

He goes on to recall the 20cm-long centipede found one day hibernating under his pillow, that his mother was convinced was protecting him. 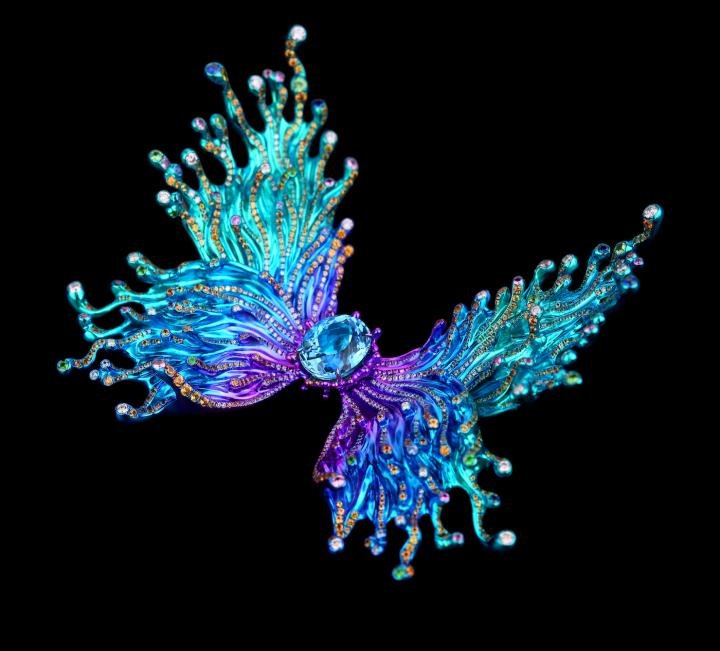 Today Wallis’s friends are amused by his ability to find beauty in the weeds that might be growing along a small alley in a rural Spanish town or trailing from the walls of a royal palace visited on a long weekend away from the city centre. Back in his adopted metropolis, a favourite district of his is Malasaña, an area known for its leading restaurants and bars; fashion, antiques and jewellery stores; and Castilian baroque architecture from the 18th and 19th centuries. 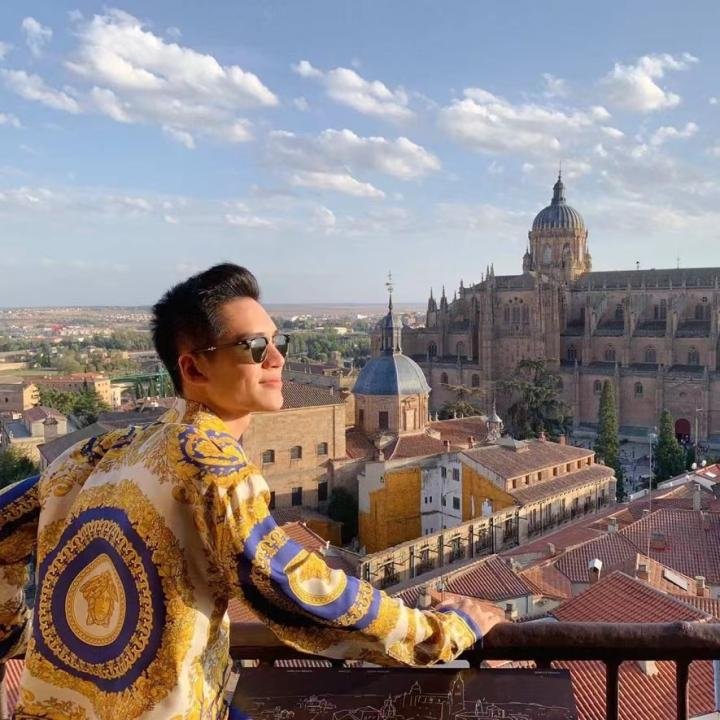 Salamanca is a favourite ancient Spanish town of Wallis’s to visit to observe ornate architecture and artisans, just over two hours northeast from Madrid.

The prodigiously talented China born art jeweller is only at the start of his jewelled trajectory but he is already amassing a wealth of artisanal knowledge. He is buoyed by multidisciplinary boundary pushing: “There are millions of jewellery professionals and when I first considered creating jewellery I did ask myself, ‘Does the world need one more jewellery designer? How will I differentiate myself?’ My inner answer was: learn the things that people don’t learn; see the things that people have never seen.”

He continues: “I am committed to making my own truly different kind of art. I am always exploring the relationship between materials and design because I want to create a new art jewellery that uses different or unexpected materials and techniques.”

Wallis’s determination to immerse himself in every kind of art as he perfects his grasp of the structure of each of his one-of-a-kind jewels and his remarkable speed of retention have seen him develop mentors and friendships with highly regarded jewellery craftsmen and visual artists who are double his age. He has just returned to his studio from Barcelona after an intensive private workshop in contemporary glass art.

Wallis is a night owl, at his most creative while his neighbours are getting ready to call it a night. Sometimes jewellery ideas even come to him while he is sleeping and he will jump straight to clay modelling a dream, rather than draw it from his impressions.

He has a deep regard for the age-old Chinese tradition of hollow out jade carving and is wielding its exceptional detail in his creations in unexpected ways, like applying its techniques to titanium or metal mesh, as seen in his Ethereal Butterfly brooch. His appreciation of a variety of Chinese art forms was established early, in his grandfather’s Buddhist temple, surrounded by statues, murals, decorative patterns and symbols. 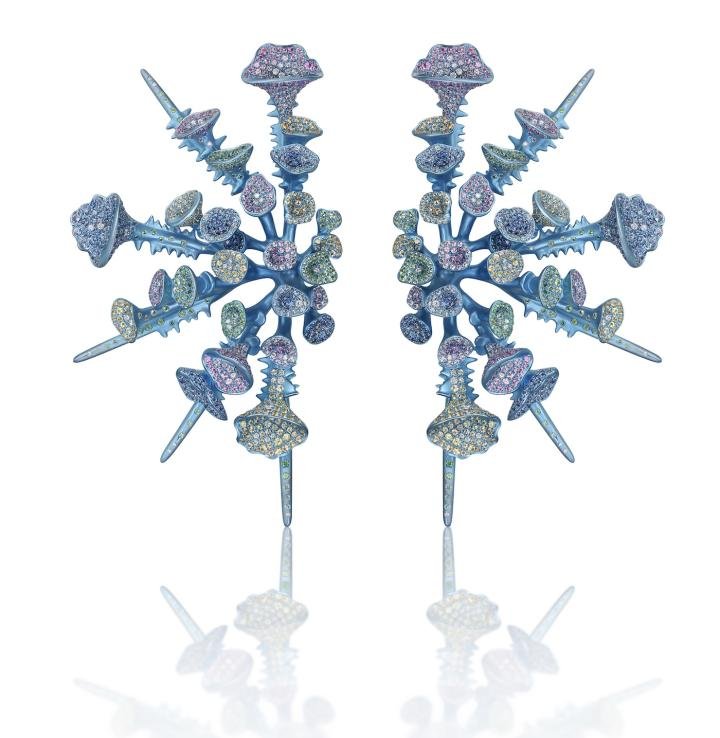 His Thorn Shells earrings are particularly intriguing, utilizing radiating forms from the same base or centre to evoke underwater and interplanetary worlds. The concentric is his recurring motif, drawn from Wallis’s imaginative rendering of nature’s many rounded shapes. “It doesn’t matter where I notice these patterns, I will stop to admire them. They possess a special energy that is hard to put into words,” he explains, having discovered inspiration for the Thorn Shells concept among conch shells he studied on the beaches of Ibiza and Formentera islands.

Wallis found himself residing in Europe in 2016, after leaving Beijing for love. He absorbed his attention in the novel art and culture that welcomed him but making his way in his new continent was challenging without the right language. But it was art that proved his way through, with sculpture and painting courses at the Madrid Academy of Art opening new doors.

The son of a professional singer mother had once considered becoming an actor but had appreciated jewellery since he was young and, four years ago, while struggling to find a necklace for himself, ended up designing his own. Within a year he had sought out different jewellery makers to study with and swiftly established his understanding of the foundations of jewellery such as wax modelling, casting, setting, polishing, engraving, gold plating and titanium colour anodizing. 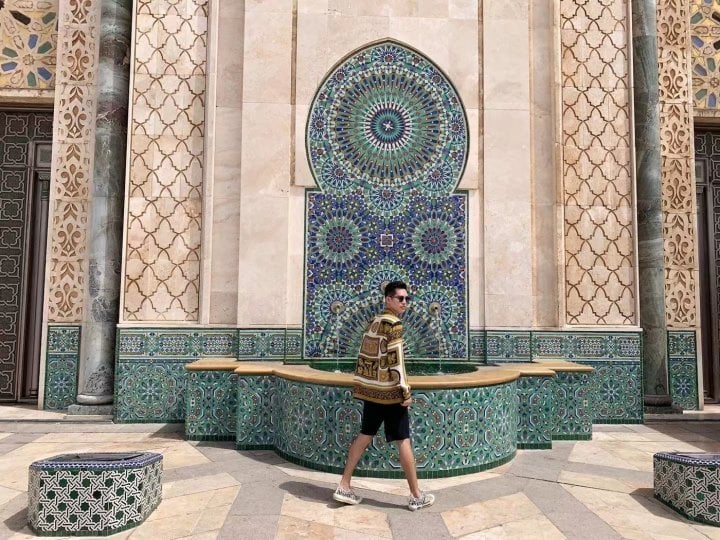 Wallis’s key craftsmen are mainly in Hong Kong but he is attuned to expert jewellery craftsmanship and artistry from around the world and appears to thrive on a collaborative spirit despite his very singular artistic ambitions. He has many founts of inspiration that are not from the jewellery industry, from cytology to textile design.

Although Wallis is excited about innovation across the board, when he speaks of jewellery influences on him, he has greatest admiration for a historic pioneer – René Lalique. It was seeing Lalique’s timeless masterpiece, the Dragonfly Woman corsage ornament, in Lisbon’s Calouste Gulbenkian Museum, that solidified Wallis’s ambition to become an artist: “It truly is a living sculpture. I experienced an emotional response viewing it in person. It felt magical and divine.” 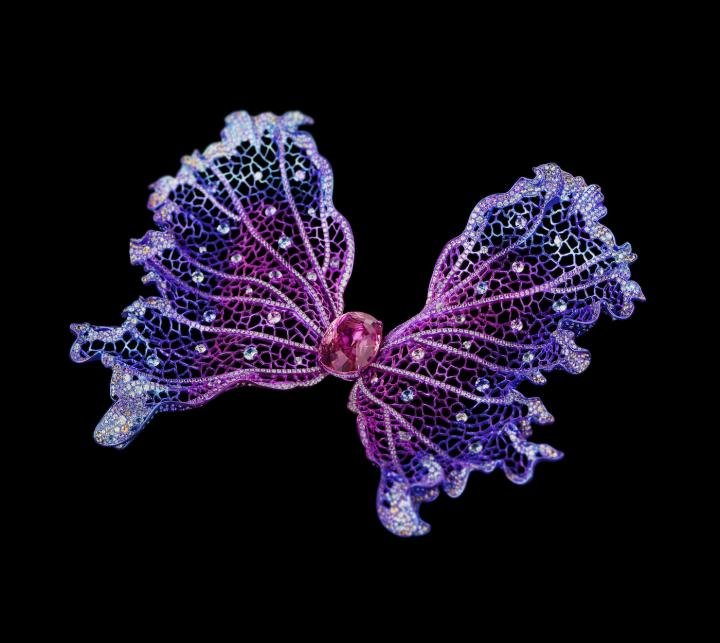 Wallis’s father was involved in the export sector while his mother, now mainly an art collector, had more of an impact on her son’s aesthetic expression and interest in adornment. She has always found that going through her collections, from costumes to art, evokes special memories for her.

When he was a teenager she would show Wallis her precious costumes from earlier in her career and treasured jewellery, singing and dancing in them as if she was performing an exclusive fashion show for him. Once she invited Wallis to try on some of the pieces for himself. “That very special experience with my mother gave me a profound new understanding of beauty and elegance,” says the young designer wistfully.

The international museum curatorial community and high jewellery fair organisers are already being drawn to this master in the wings. Wallis has been invited to exhibit in the Emerging Talent section of November’s exclusive GemGenève show, known for both its distinguished jewellers and being a launchpad for the next generation of creators.

In the same traditions that capture a magical moment in time through objets, Wallis hopes he can create art jewels and sculptures that serve as carriers that tell his past, present and future: “Sometimes I still dream about that strange and memorable place from my past, where I had countless experiences but have nowhere to revisit those memories now in person.” Fortunately for Wallis and art jewellery lovers, his creations keep its inimitable imprint on him alive.

How can you create a collection of vintage jewellery when you can’t afford the pieces signed by prestigious brands that fetch record prices at auction? (...)

Beyoncé is starring in Tiffany & Co.’s latest campaign celebrating individuality, love, and universal connection. The result of a close collaboration (...)

The world’s largest independent gemological laboratory has added a cut grade to its reports for loose fancy shaped diamonds. In addition to traditional (...)

GemGenève is back in November 2022!

GemGenève is holding a second, exceptional edition again this year in Geneva. The fifth edition of the international jewellery show will take place from 3rd (...)

In a 37 mm-diameter case set in diamonds reflecting the fiery glow of opal, the Divas’ Dream presents one of the most beautiful horological complications: a (...)